So here we have a bit of a post that captures some of the history and background on how the TechWorks ECS Mitsubishi Controller came to be.    I'm Duke3k & I live in the foothills of Denver
these are the cars that I originally developed the controller for  : 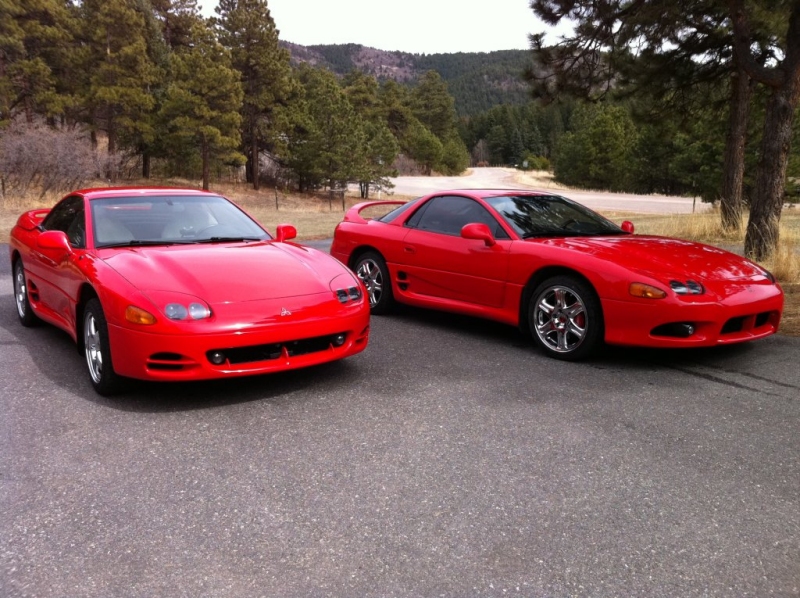 
So here's how this project got started:
The early model Mitsubishi 3000gt VR's (including that '95) have a factory included Electronically Controlled Suspension(ECS) system. It was pretty much over the top and kinda ahead of it's time. It has as sensor inputs to the ECS controller - a single axis G-sensor ,a Throttle input feed, Steering Wheel sensor inputs, Brake Pedal input, and a user selection switch on the console. With all those inputs the factory ECS controller controls the 4 adjustable shocks(struts) in the car. Each strut is capable of being commanded by the ECS controller into a Hard , Medium or Soft setting that primarily adjusts the Shock Rebound dampening rates on the fly. There's a motor (not a stepper) that is physically inside the strut that when power is applied rotates a shaft and changes the orifice opening size thru which strut hydraulic fluid squirts thru. the bigger the opening more fluid flows thru on rebound = softer rebound = smoother rider. Smaller opening = less fluid thru orifice on rebound = stiff sporty suspension.

Mitsubishi completely eliminated the system starting in late '95. So the '98 above did not have it when I bought it.

This bugged me to no end - so I decided that I wanted to retrofit in this controllable suspension system into my '98 VR4.   The '98 VR4 (and 95, 96,97 & 99)   has none of the sensors , none of the factory wiring harness feeds necessary and the struts that were in it were the later model fixed rate struts - not the controllable ones.

What I decided to do was to remove the non-controllable factory struts & replace them with the factory controllable ones and then build a manual controller to control the struts (skipping the sensors ) .

Back in 2010 I had not messed with Micro-controllers much so this was my first design (that I never ended up using )based on TTL circuits - it's only enough circuit to control one strut: 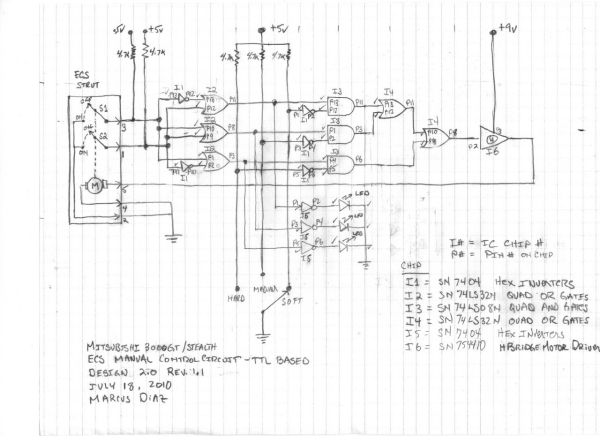 Here's the actual design prototyped on a breadboard and I got it workding. You can see the bread board connecting to the test factory ECS strut cartridge that I use. It's connected via a spliced cap connector plug that plugs into the top of the factory strut. It has five connections - Motor, Signal Switches S1 & S2 and two ground wires. : 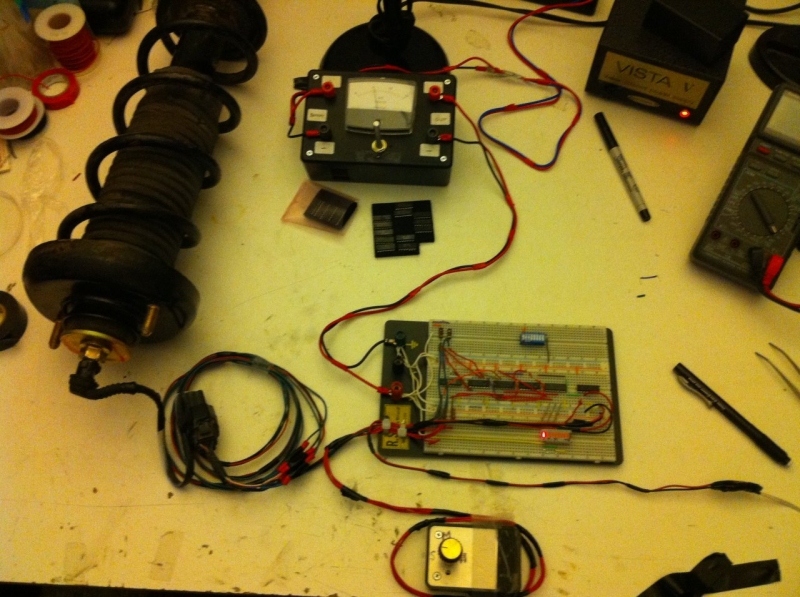 Here is a youtube video showing the use of the ttl circuits in action:

While the TTL circuits worked they would have been difficult to easily add behavior or make changes to the way the system operated.  A much better alternative was a micro controller based solution So I dove into the arduino platform and went with the Standard Arduino for the time period - the  Duellimanov Amtel328 16mhz  32kb.

Here is a youtube video showing the use of an Arduino & a prototyping board controlling a single strut:

What I finally came up for the design was this  hand drawn prototype design that could be used to build an Arduino Shield. 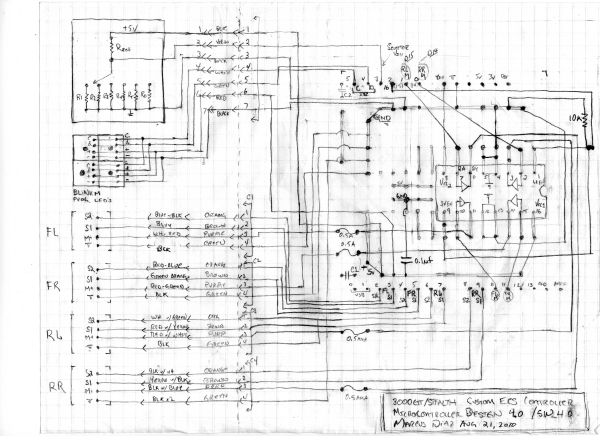 That lead to this Arduino full on implementation that had a custom prototyped shield piggybacked onto it: 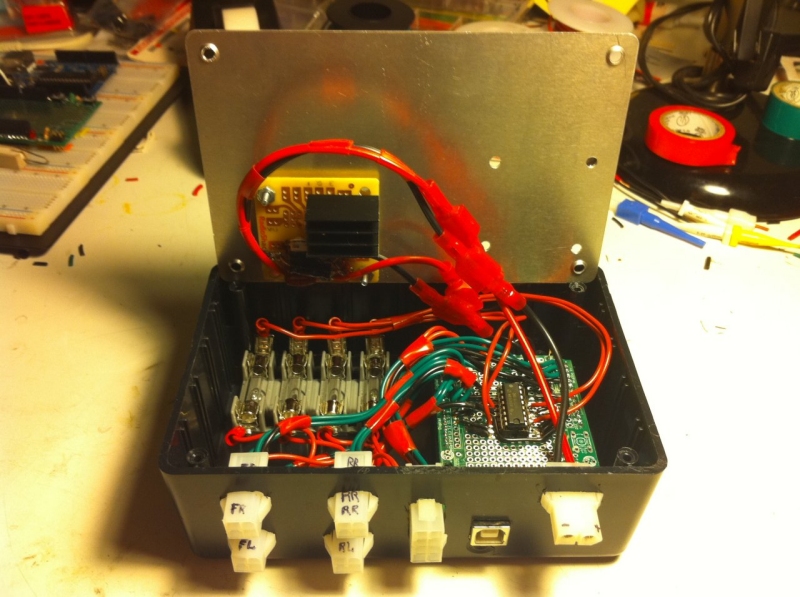 Here's it is all buttoned up ready for installation: 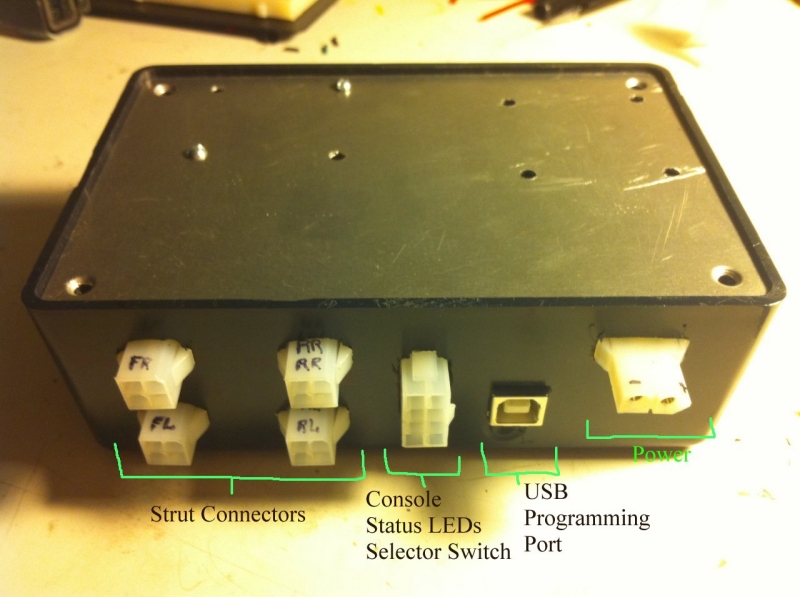 Here's all the final pieces of the custom Arduino Based Build assembled & being tested including the console controls/display. -Thats a 4 position rotary switch for the mode selection. & those are 4 addressable I2C BlinkM LEDs that display the strut status/diagnostic info. 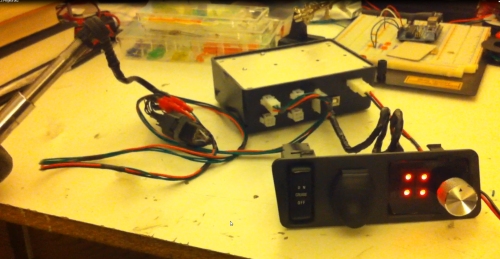 Here it is installed in the back of my 3000gt, I used cat5 for the five runs of wire needed to make the wiring harness to retrofit into the car. ( 4 runs to each of the struts and 1 run to the console control display & lastly a switched +12v power and ground feeds. Oh and you gotta love Gorilla tape. ... I was stil debuging & i didnt want to keep messing with the screws. 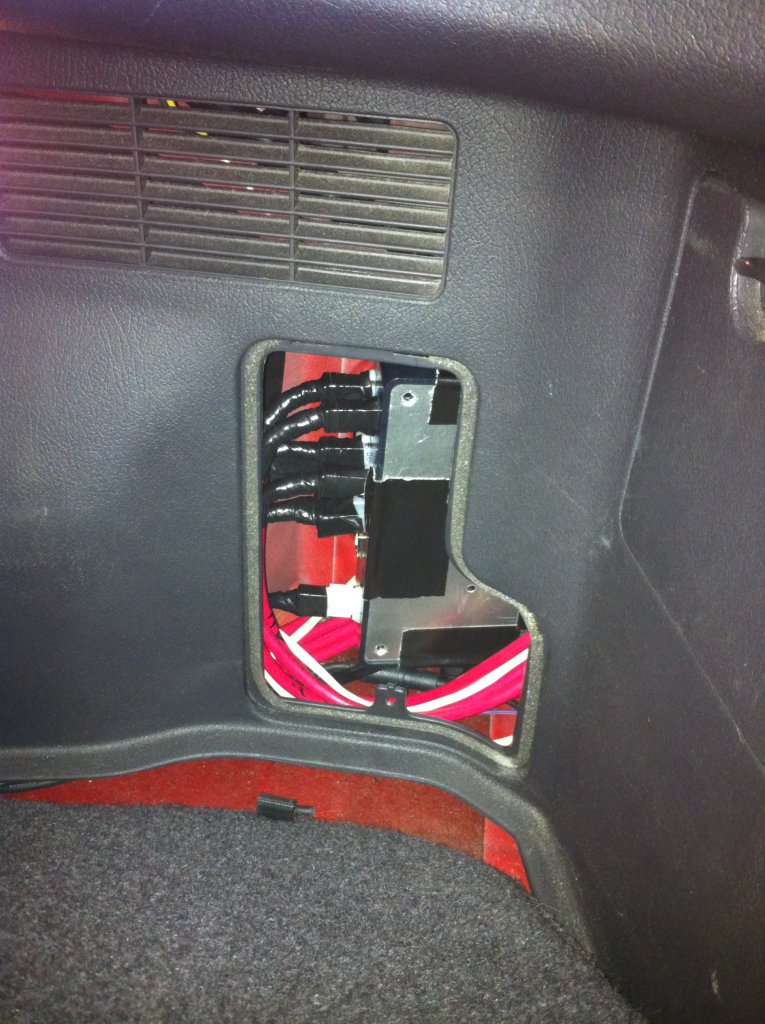 And that's the way it was for two years...I ran with that custom build in my car... I fairly regularly attended the local car meets for the 3000gt's in the area and kept getting asked - hey when are you going to make these so that we can do that too? Well around 2012 - I got motivated and came up with this custom - all one board solution - that still based on the Arduino software IDE platform and hardware - but all on a single board that takes up less space and is easier to build: 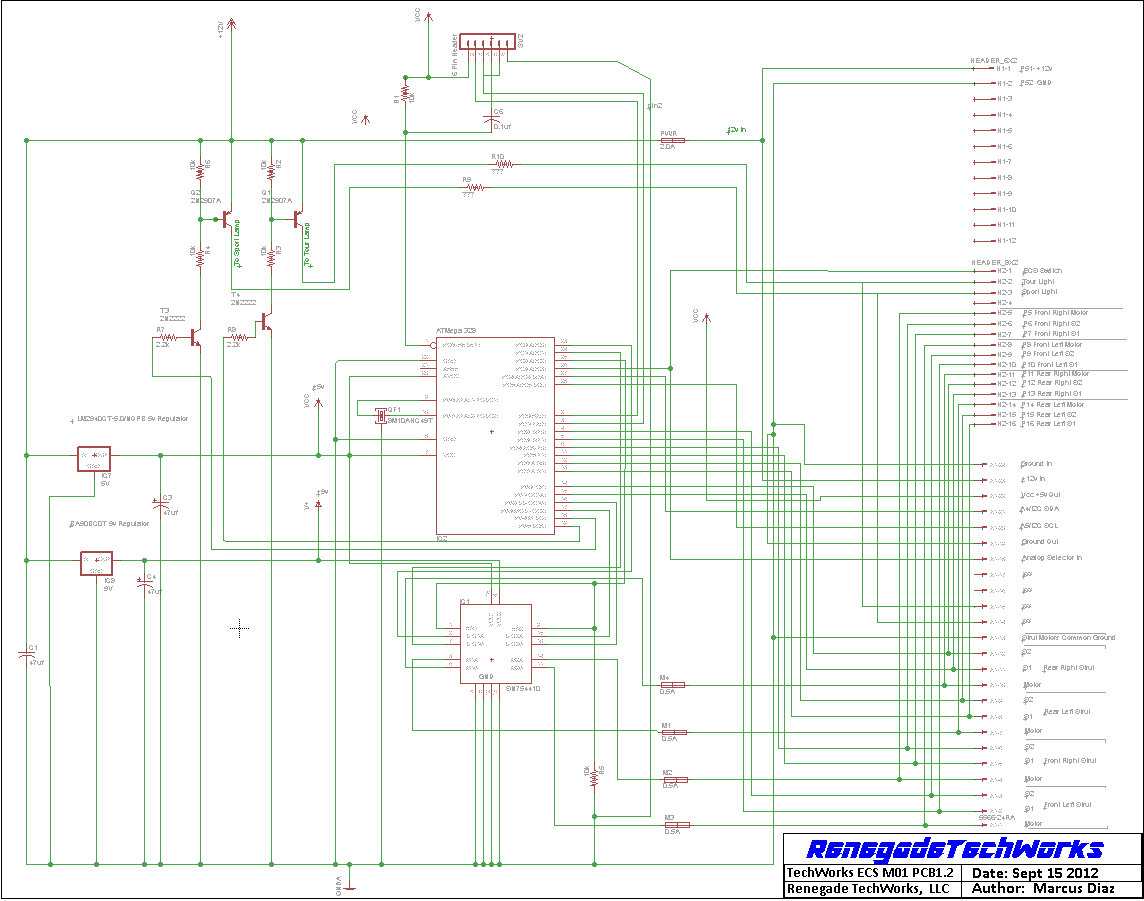 Here's the production version of single board design - its basically an AMtel328 arduino simplied design with the additional circuitry that used to be on the shield piggy back : 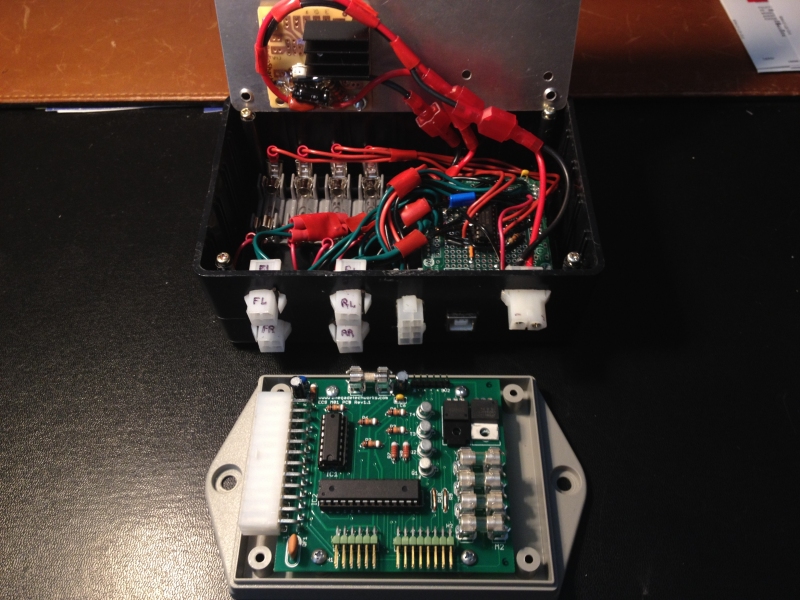 And here's an overview youttube Vid of the production build being demonstrated.  In the final production version I switched from the 4 I2c controlled BlinkM leds to a simpler set of 4 - WS2801 chained 12mm Pixel Leds. You"ll see the WS2801's in the video.

Here's a final overview video of the system being demonstrated:

I started selling these in Sept/Oct of 2012 and have shipped them as far as England & Australia. One major design addition that has made them popular is that they are plug compatible with original OEM ECS controllers - so if your an early model 3000gt owner and your factory controller dies you can replace it with a TechWorks controller (for $100 cheaper). Manual control only - but a lot of people like it that way it turns out.

Well thats it. Hope you enjoyed the story. If your interested - all the Arduino open source code and electrical schematics are available for download on http://www.renegadetechworks.com

p.s. Nate anytime you want to claim that "beerware open source license" - just let me know and I'll drive up and pay my dues .